The NILAFAR program aims to study the impact of hydrological fluctuations on societies at the transitionbetween hunter-gathering and agro-pastoralism in NE Africa over the last 20,000 years. Its objectives are to better understand the mechanisms at the origin of the intensity fluctuations of the African monsoon (external forcing and internal feedbacks of the climate system), and at the origin of episodes of hyperaridity that occurred over a few hundred years. During these episodes, the Green Sahara, or African Humid Period, saw the retraction or dissemination of particularly mobile human groups. In an environment that may have been as limiting as it was stimulating due to the alternation of these hyperarid and wet phases, populations innovated using new economic strategies, for example by shifting from a predation to a production economy. NILAFAR proposes the quantification of hydrological-monsoon changes (through study of lake & river sediments and hydro-climatic models) to explore the correlation between paleo-hydrological regimes and the evolution of these anthroposystems in progress, in the Afar valley in Ethiopia and Djibouti. The Green Sahara or African Humid Period, which is characterized by heavier rainfall than today, will been revisited using innovative geochemical and organic tools that allow a quantification of hydrological variations of lakes and chemical alteration of Ethiopian soils at high temporal resolution (~100 years). Lakes Afambo, Gamari and Abhé and their watersheds are chosen for their extreme sensitivity in this area of the Sahel. These lakes contain very high-resolution archives of major monsoon and environmental changes that occurred from the late Pleistocene to the early Holocene. The originality of the project is that it is designed as an interdisciplinary and human collaboration between different fields of study in the Afar region (archaeology, coring of Abhé basin lake sediment, geomorphology, cartography), hydro-climatic modelling and innovative tools (lithium isotopes, biomarkers) and classical analytical tools (neodymium isotopes, study of diatoms and hydrochemical transfer functions). The establishment of robust age models, both for lake and soil archives and for successive human occupation sequences in the area (using radionuclide and C14 dating) is a priority of this program. In parallel, large-scale climate simulations will be used to study the mechanisms of monsoon change during the last deglaciation/Holocene and a rain-flow model will be developed to better understand the changes in the flow of the Awash River. In the long term, these models will be used to establish future climate and hydrological scenarios for this region. The benefits of the project will be retro-action by consolidating future scenarios of ecosystem evolution for future populations. By exploring the co-evolution of Man-Ecosystem-Climate over a wide chronological sequence, one of our aims is to propose solutions to better adapt populations to the agricultural and water resource challenges of our societies, of first order in countries such as Ethiopia and Djibouti which are facing infrastructure development. The benefits will also include training students and future researchers to understand global warming and cautiously predict the future of arid regions. This transmission of knowledge will take place over four years through a PhD thesis request for modelling, a request for two post-doctoral students for the acquisition of innovative data, a master's internship in archaeology and field and course training of university students in Ethiopia and Djibouti. 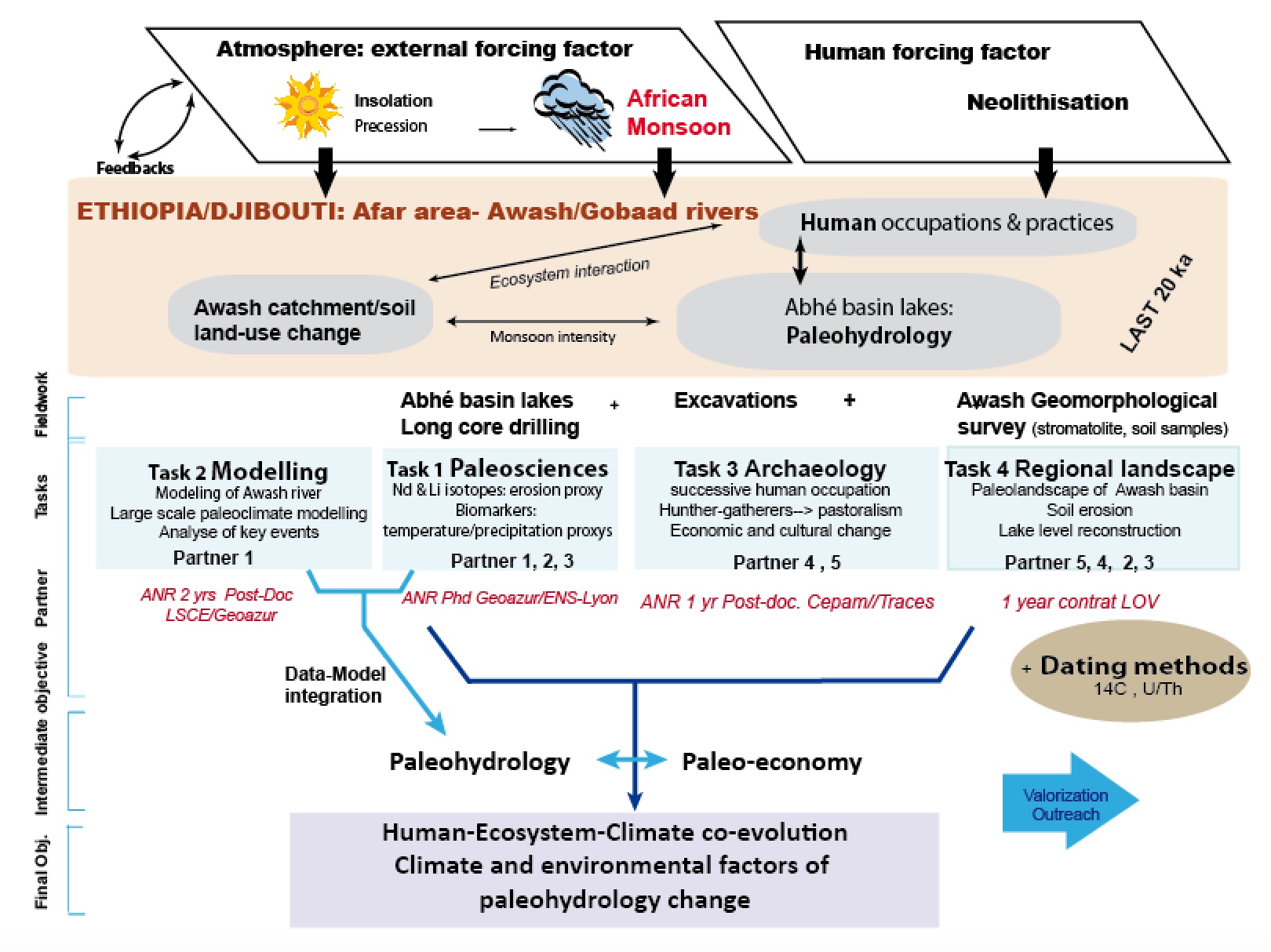