From 2008 to 2014, the T2L2 instrument executed some 600 million timestamps, showing that it is possible to remotely compare clocks with a degree of uncertainty better than 500 picoseconds. The clock frequency of the DORIS oscillator on Jason-2 has also been validated with unprecedented precision. But above all, T2L2 has paved the way for new experiments, notably for the future European Laser Timing link (ELT) that will be part of the Atomic Clock Ensemble in Space (ACES) scheduled to be launched to the International Space Station in 2016. The T2L2 experiment is currently conducting other optical telecommunications tests.

Launched on MeteoSat-P2 in 1992, the "LAser Synchronization from a Stationary Orbit" or LASSO payload validated the concept of optical time transfer by laser link and, more importantly, demonstrated the interest and potential of this high precision method of time transfer. Time transfers were realized between OCA (France) and MacDonald (Texas, USA) stations with a precision better than 100 ps and an accuracy of 1.5 ns.

The Observatoire de la Côte d’Azur (OCA) has adapted the technique of satellite laser telemetry (SLR) and lunar laser telemetry (LLR) to the needs of time transfer in order to synchronize remote clocks. On this basis, the T2L2 instrument has the objective of performing picosecond stability and sub-nanosecond accuracy.

The T2L2 space payload, initially planned to be onboard MIR in 1999, then with the ACES mission on the ISS, was accepted in 2005 by the French space agency (CNES) as a passenger of the Jason-2 altimetry satellite. Successfully launched on the 20th of June 2008, the T2L2 instrument was switched on five days after. Once operational, it has begun to detect laser pulses from telemetry stations of ILRS network (International Laser Ranging Service). 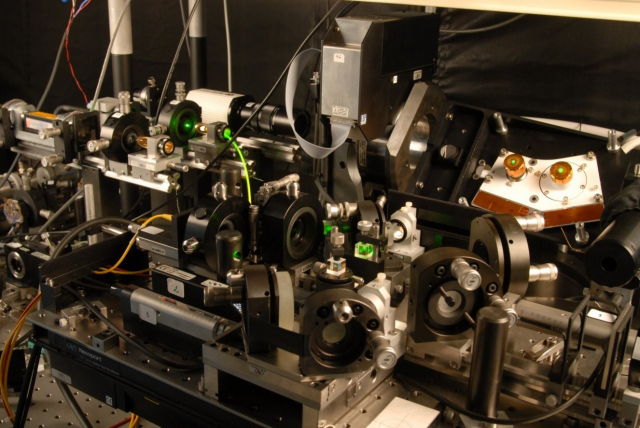 Test bench for the T2L2 space instrument before integration on the Jason 2 satellite.
The white plate on the right is the instrumen's optical module which receives light pulses from laser stations on the ground. 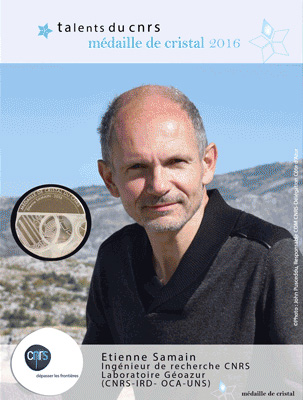