Knowledge about the deep interior of the Moon puts tight constraints on its formation and ultimately on the evolution of the Earth-Moon system . Measurements of the tidal response of the Moon resulting from the gravitational field of the Earth provide unique evidence on its inner working and can be obtained from orbiting spacecraft as well as Earth-based observations.
Furthermore, the Moon dynamical monitoring is the most accurate ever made in the Solar System thanks to the deployment of Laser Retro-Reflectors (LRR) on its nearside surface leading to a centimeter accuracy over the past 40 years. Such accuracy requires a high accurate modeling of its orbit but also of its rotation, inducing an unique development in the inner structure for an object different from the Earth.
This project aims at a synthesis of a large amount of observations and modelings obtained from Earth-based Lunar Laser Ranging (LLR) and orbit-based Laser Altimetry (LA) to achieve an improved and consistent determination of the tidal deformation of the Moon by estimating its tidal Love numbers and consequently constraining the present dissipation in the Earth-Moon system. 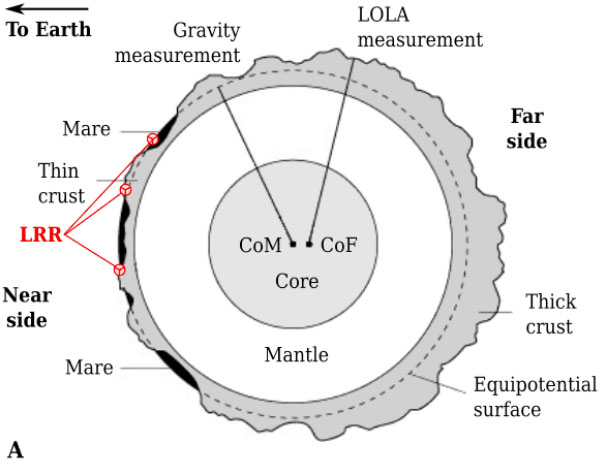 (A) Schematic view of the interior structure of the Moon.
The red circles at the near-side of the Moon denote the latitude at which the laser retro-reflectors (LRR) are located on the lunar surface.
Modified from Kenneth R. Lang, Tufts University